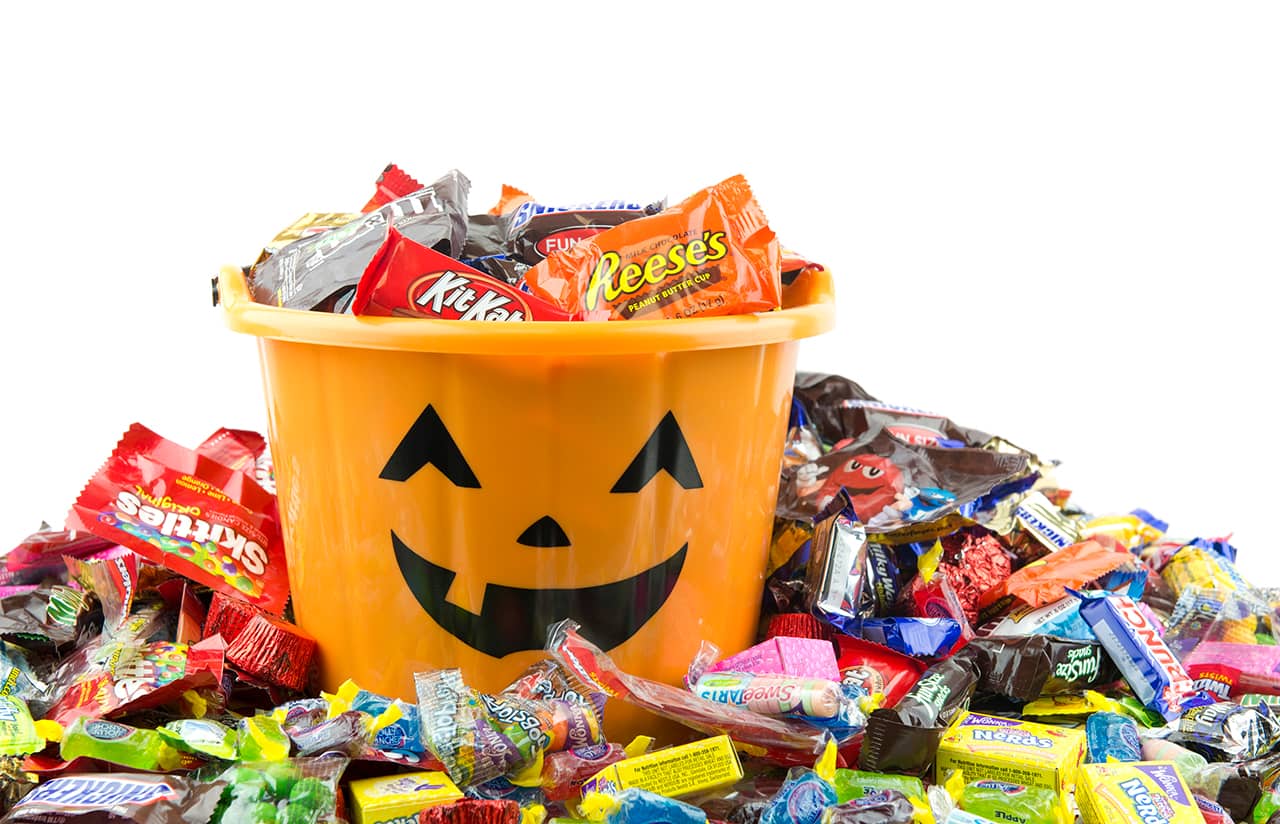 Okay, I’m guessing you came to this blog for a couple of reasons. First, you’d like to be a little health-conscious as you hand out treats this holiday season. You don’t want to add to the growing obesity problem among the youth of our country, especially the youth of your neighborhood. You also don’t want your house to get egged. You are not interested in being the only house on the block that hands out toothbrushes or apples, you plan to give out the good stuff, but why can’t that good stuff not also be somewhat good for you? You also would like a little less guilt about the few dozen pieces you sneak out of the bowl the week leading up to Halloween, and in between trick-or-treaters coming to your door.

First, let’s say you live in the Greater Portland Metro area and you expect a handful of kids with dietary restrictions. You want to be hip with the young ones, and so you’d like some vegan options in your bowl on the off chance they have a helicopter parent nearby or are particularly “woke.” Now, to be fair, just because something is vegan does not mean it is healthy by any stretch of the imagination, it just means it doesn’t contain any animal products. Vodka and Oreos are vegan, that doesn’t make them a good breakfast replacement. Here are some “normal” candies that always make the rounds in a traditional Halloween basket that are vegan:

These tend to be pretty “safe” to include in your basket offerings to keep the more rambunctious costume hooligans from moving from treats to tricks. I want you to have a well-thought out assortment, but not at the cost of an early November toilet paper teepee cleanup.

“But what about the chocolates?” You ask, well none of the typical chocolate candies are going to be free of milk products, so none of them are vegan, but as I mentioned earlier, that has no bearing on how “healthy” they are for you. As we try to figure out what constitutes a “healthy” piece of candy there are a few places I am going to avoid for the sake of simplicity, first, none of these expensive boutique alternatives to popular candies. If you’re looking for an article detailing such products, here are two that I found that might be helpful:

I don’t want you to have to break the bank to buy some candy for the neighbors that doesn’t make you feel guilty, so I won’t include anything that isn’t common and only include treats with a fair value when kids trade candy following an evening of stockpiling. At my house sibling candy trading was just as important as the house-by-house collection, so grabbing a high-value candy, perhaps your little sister’s favorite, could be worth a few of your favorites once everything was spread out on the livingroom floor and deals were struck. Some kids might be unhappy they ended up with a Snickers, but another kid at school will be happy to trade them for some of that peanut-nougat goodness, so everyone’s happy.

I’m seeing a number of articles that claim Smarties are a particularly healthy candy. It’s number one on a few online lists. At 5 grams (4 of sugar and one mystery) a roll has just 20 calories, and is essentially just sugar. That means it’s gluten free, vegan, and allergen free, but that also means it’s just sugar, like that’s it, it has no other nutritional value to speak of. Including Smarties on these lists is basically like including sugar cubes. I would NOT call sugar cubes “healthy” or anything that is just sugar without some additives for flavor. Even though they’re called “Smarties” calling them a smart alternative to other candy is pretty dumb. Same goes for candy corn. I hope you aren’t featuring this treat in your basket offerings, but if you are, know that it’s basically just sugar and cornstarch. Not healthy, and it doesn’t taste good either.

So pure sugar isn’t what I would call healthy, but what else is needed to bulk up a candy into the kinda-sorta-maybe-good-for-you department or at least give you a little less guilt about your midnight treat? Low in calories sounds good, but I’ll stop you right there if you think I’ll be including any “mini” candy alternatives on this list. If you think you’re making any friends handing out mini candy bars you are sadly mistaken. It’s Fun Size or bigger. This isn’t the Great Depression, we don’t need to ration chocolate, hand out something with some substance, not the hint of a full-sized candy bar.

Halloween Candy tends to have a few major nutritional components (I am not advocating you get your nutrition from Halloween Candy, just in case that wasn’t clear) Calories, Sugars, Fats, Proteins and trace amounts of Vitamins. The vitamins only come into play when the candy includes things like “Real fruit juice” in the case of Mike and Ikes and Twizzlers (but truth be told, I’m from a Red Vine household)

Quick Aside: Per piece a Red Vine has 22 calories while a Twizzler has 40, both are vegan and certified kosher, and while Twizzlers have a small helping of your daily iron needs they taste disgusting and I won’t eat them. If you want to include some red licorice, please choose the “healthier” Red Vine in your Halloween basket.

Popsugar.com made a wonderful list of calories, fat and sugar found in fun-sized candy. I’ll be leaning on that for my breakdown. It’s easy to glance at the biggest number in the nutritional facts and call it a day. While calories are important, they are not the end-all for candy healthiness. Those calories come from a number of different sources, mostly sugar, fat and protein. Fat is further broken down into trans-fat, the kind that really can’t be argued to be good for you, while regular fat can be great, especially if you’re on a Keto diet. Popsugar’s list isn’t the best, but it puts Snickers as the highest calorie at 130 kcals while Sweetarts apparently only have 10, I’m guessing that’s for a single piece, and it’s almost entirely from sugar, so again, calories are not the best metric for proving healthiness. This particular chart also doesn’t put size or weight in as a factor. Snickers fun size bar is quite a lot bigger than a typical Sweetart, which means it pretty obviously has more calories and will be substantially more filling. But unlike the almost purely sugar Sweetart, the Snickers contains peanuts and nougat, giving it a fraction of protein and plenty of fat to make it a better way to satisfy hunger than just sugar.

Runnersworld.com posted this article about healthier candy which is tailored for people who exercise a lot. Candy with nuts in it is guaranteed to have some protein as well as some good fats. If you’re looking for the candy that feels the least like a candy, Payday is a great option. It’s just peanuts held together with caramel. Two fun-sized Paydays have 5g of protein between them, which is much less than the 16g of sugar they also share, but that ratio of 16/5 is the best you’re going to find in the candy isle. In 2 fun-sized Snickers you’ll find 2g of protein and 18g of sugar, 9/1 places it far below Payday as far as muscle building goes.

If you’re looking to keep yourself or your children safe this Halloween season and you want to make sure you’re not over-indulging on prepackaged treats, your best bet is to eat in moderation. If you’d like more nuance with your sweet tooth, check the back label and figure out how many calories your treat has compared to stuff that actually matters, like non-trans-fats and protein. Last but not least, eat what makes you happy. Halloween is a great excuse to enjoy your favorite childhood candy, just make sure to brush your teeth afterward!

OR fill out the form below: